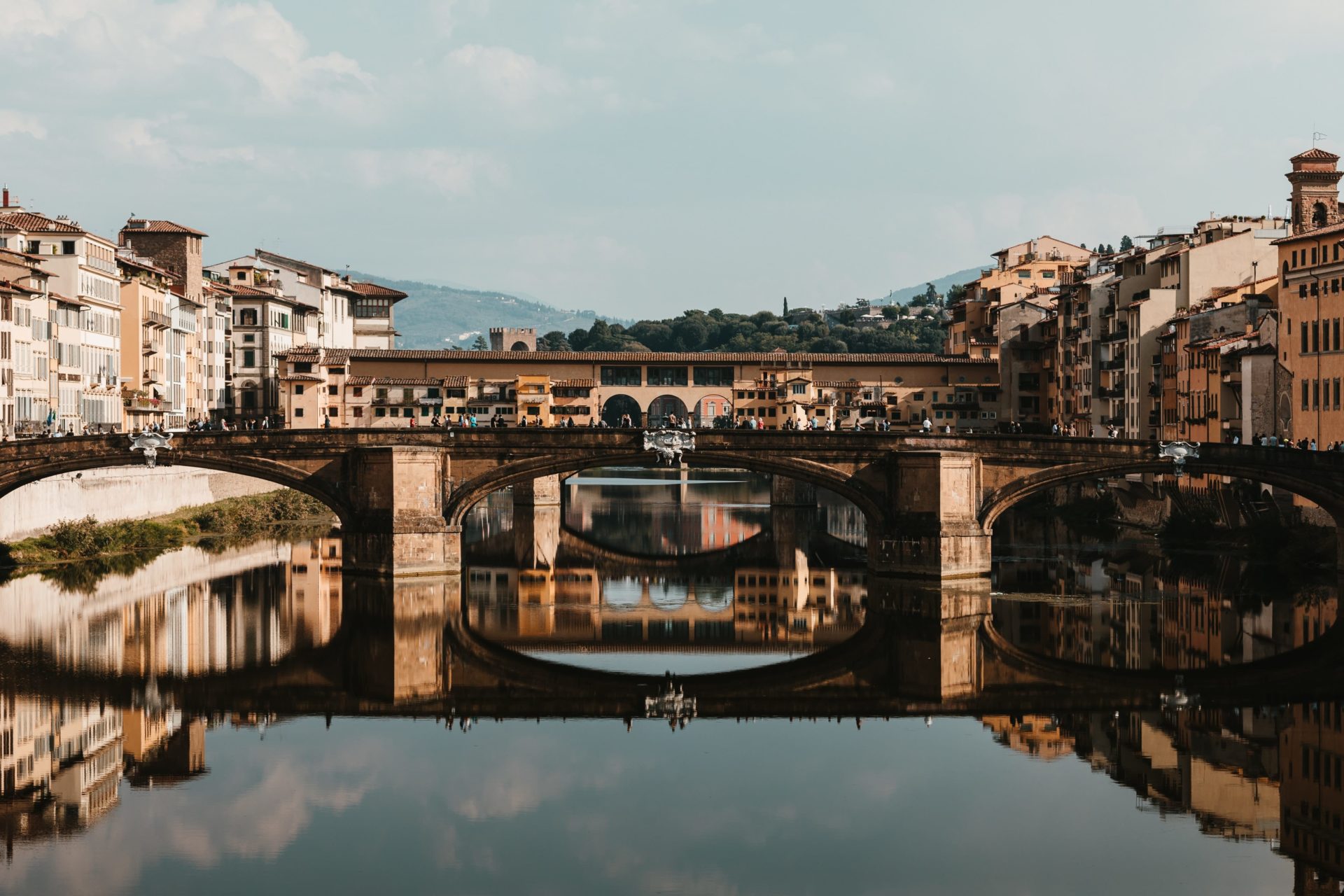 From strolls along the Ponte Vecchio in Florence, to soaking up some of Italy’s finest wines straight from the vines, or basking on the sand beside the glittering Tyrrhenian Sea, Tuscany really does have it all with marvelous hotels and Michelin-starred restaurants to match. Here are 10 fab hotels to take you from town to country:

A beautifully renovated mansion beside the Arno River, Hotel Lungarno echoes its waterside setting while transporting you back to the Renaissance in style. Start the day with an alfresco breakfast on a sun-drenched balcony overlooking the cobbled streets of the UNESCO city, a treasure trove of art and architecture to admire at every turn. Your cultural journey continues in the hotel’s Picteau Cocktail Bar, named after the Picasso and Cocteau pieces adorning the walls where you can you can sip a vintage cocktail surrounded by 20th century artistic masterpieces, part of the largest collection in Europe.

Standing proudly on Piazza Massimo D’Azeglio, Hotel Regency puts you right at the heart of Florence’s rich culture and history, while feeling a world away from the bustling arts and shopping scene on its doorstep. Inside, the Regency décor, Renaissance art and original features – from antique mirrors to period lights – have a timeless charm. Outside, you’ll find the ‘Secret Garden’ – a tranquil spot to enjoy an aperitif or simply bask in the Tuscan sun.

Named after the Vecchietti family, who come from a long line of merchants and patrons of the arts, this 16th-century residence is a beautiful blend of original features woven into the contemporary-classic interiors. All the villas of the family, including Palazzo Vecchietti, were locations where troves of prestigious works of art were housed—including the Sant’Agostino nello Studio, Botticelli’s masterpiece found today in the Uffizi art gallery which is just a seven-minute stroll from the palazzo.

Villa Mangiacane is the quintessential fairytale villa overlooking rolling hills dotted with cypress trees with views of Florence in the distance. The powder pink walls house romantic rooms decorated with one-of-a-kind antiques and masterfully restored pastel coloured frescoes depicting hunting scenes hinting at the villa’s 15th century past. Throughout 2021, Villa Mangiacane is only bookable for exclusive use – so you can have this hilltop hideaway set in 600 acres of flourishing vineyards all to yourself if visiting this year.

History radiates from the sun-drenched walls of Villa di Piazzano, a 500-year-old estate which was originally the hunting lodge of Cardinal Passerini, a favourite of the Medicis. Time seems to move more slowly here, as vegetables are plucked from the organic garden ready for a farm-to-table supper, and the white parasols dotted around the pool flutter gently in the breeze. Set on the border between Tuscany and Umbria, this Renaissance country house puts you in pride of place for discovering the region’s highlights, whether it’s exploring the ancient Etruscan heritage of nearby Cortona or hopping over the border to pretty Perugia.

Technically on the Umbrian side of the Tuscan border, Castello di Reschio still serves up an oh-so-seductive slice of classic Italian countryside with its sprawling 1,500-hectare estate scattered with traditional farmhouses, state-of-the-art stable block, and rustic outdoor pool overlooked by Il Torrino, the thousand-year-old castle’s original watchtower turned trendy pool par. Dating back to 1050, there is a story behind every lovingly restored terracotta brick, with bespoke furniture handpicked by architect Count Benedikt Bolza and his wife Nencia Corsini. Personal touches are hidden within each room, from vintage photographs to ornaments discovered in local antique markets.

Tucked within the Tuscan hills and surrounded by cypresses and wild woods, Castello di Spaltenna has all the hallmarks of a storybook castle. From four-poster beds to winding olive groves, there are characterful touches inside and out, with far-reaching views over Sangiovese vineyards from La Terrazza, a traditional stone vaulted tavern and terrace, and a Michelin-starred restaurant re-interpreting traditional Tuscan dishes. Meanwhile, the spirit of nearby Gaiole in Chianti is earthy, rustic, and artisanal – from its wineries and workshops to potteries displaying local handicrafts.

Every room at Grand Hotel Principe di Piemonte, a 1920s architectural masterpiece in the coastal resort of Viareggio, has views over the Apuan Alps or the Tyrrhenian Sea – which can also be admired from the panoramic rooftop bar beside a heated outdoor pool. Wander along the wide, beachfront promenade, lined with Art Nouveau hotels and grand houses, before tucking into a two Michelin-starred meal at Il Piccolo Principe, inside or on the sea-view veranda.

An elegant Tuscan seaside villa overlooking the sea, Hotel Byron sits in an attractive garden with a pool and decking area. The beach is directly in front of the hotel, so all the rooms have a wonderful view of the sea or the Apuan Alps. Simply sit on the terrace and watch the super yachts moored off the coast, or borrow a bike from the hotel and take a ride down Forte dei Marmi’s pretty avenues and bike trails. Be sure to make the most of the hotel’s picnic and romantic dining experiences, where you can enjoy the delectable dishes created by the hotel’s Michelin-starred chefs on the shores of the Tyrrhenian coast for lunch or dinner.

Set in the medieval town of Pietrasanta, renowned as an international centre for marble sculpting, Albergo Pietrasanta is a striking 17th century palazzo with a superb collection of modern art, a beautiful sunlit courtyard, and a pretty breakfast conservatory. Step out to the monuments, sculptures and cafés of Pietrasanta or take a bike ride to the nearby beaches, with golden sands that stretch for 5km and more.

The Events to Travel for this September

Get Spooked: 3 Haunted Hotels To Stay At (If You Dare)