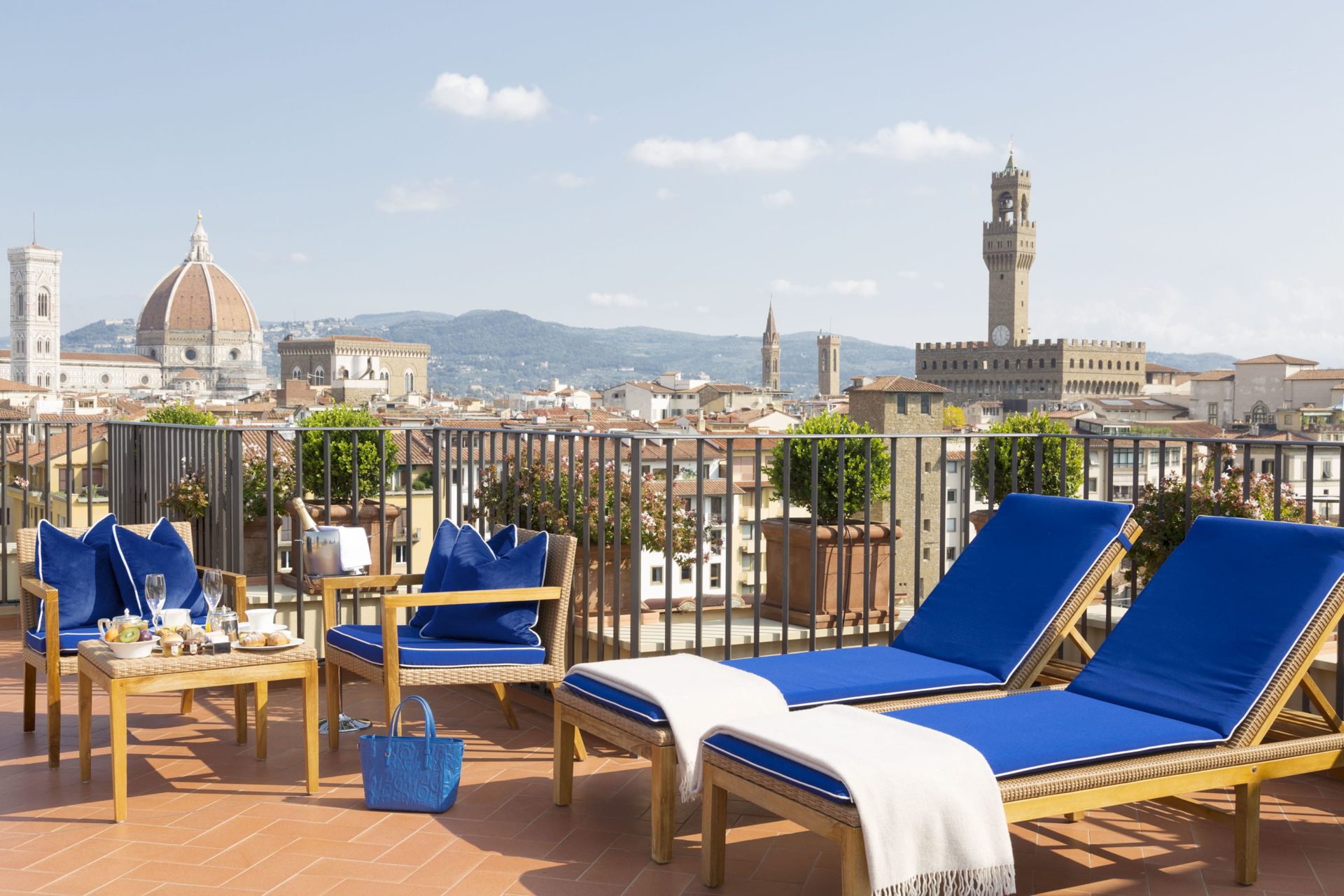 City breaks are all about seeing the sights, but what if you could tick some of the landmarks off your list from the comfort of your luxury hotel? No queues, no crowds, just an urban oasis of calm to call your own.

From a Colosseum-facing palazzo to balcony suites overlooking the Eiffel Tower, be sure to base your next city break out of these perfectly placed boutique hotels with monumental views.

Directly across the street from the Colosseum and just steps away from the ruins of the largest gladiator training school ever discovered in the Eternal City, you’ll be sleeping next to some of Rome’s big hitting heroes at Palazzo Manfredi. Originally a 17th century noble’s villa, this Roman bolthole has been transformed into a contemporary, light-filled retreat while keeping ancient history centre stage.

Tip: Some bedrooms and suites offer direct views of the Colosseum itself, so you can soak up the world famous amphitheatre while you’re sipping your morning espresso in bed.

Get the LUXE Rome guide

The Eiffel Tower, the Arc de Triomphe, the Sacré Coeur… they’re all visible from the blossoming rooftop garden and terrace of Hotel Raphael. This pinnacle of Parisian chic is superbly situated in the heart of the 16th arrondissement, and has been managed by the same family for four generations.

Tip: The Eiffel Tower Duplex Suite comes with its own private terrace so you can enjoy your morning croissant while taking in the French capital’s most recognisable attractions.

Get the LUXE Paris guide

Sitting at the centre of Manhattan in New York’s trendsetting Garment District, Refinery Hotel houses loft-like atelier rooms, a prohibition-style jazz lounge, and a rooftop bar with views of – you guessed it – the Empire State Building. Thanks to its retractable glass roof, and indoor-outdoor seating, the Refinery Rooftop is a fashionable Midtown refuge no matter the season.

Tip: Sip signature cocktails like the 13th Floor Margarita and tuck into truffle fries and meatball sliders as you watch the sun set over the Big Apple.

Get the LUXE New York guide

Tip: The Dome Side rooms face into the historic train station, while the hotel’s other rooms overlook either the Marunouchi district or the Imperial Palace.

Get the LUXE Tokyo guide

A beautifully renovated mansion on the banks of the River Arno, Hotel Lungarno echoes its waterside surrounds while transporting guests back to the Renaissance in style. Throw open your curtains and breathe in the sights of Florence, from the famous Ponte Vecchio lined with jewellery shops, to the cobbled streets steeped in medieval history.

Tip: After taking in the art treasures of the Uffizi, head to Hotel Lungarno’s Picteau Cocktail Bar to sip vintage-inspired drinks as the Arno lights up, surrounded by 20th century artistic masterpieces.

Get the LUXE Florence guide

St. Paul’s Cathedral, Tower Bridge, and the shimmering Shard – Vintry & Mercer opens up to the London skyline, and puts this ancient district within touching distance. Inside, the rooms and suites contain plenty of nods to the City’s heritage. Think bespoke fabrics inspired by merchant tailors of centuries past, and historic navigation maps and photographs on the walls.

Tip: In the winter months, two spectacular igloos sit on The Mercer Roof Terrace for groups of up to six people, which come with sweeping views of the capital.

Get the LUXE London guide

The Rome Hotels to Book for Spring

6 Iconic French Dishes and Where to Try Them