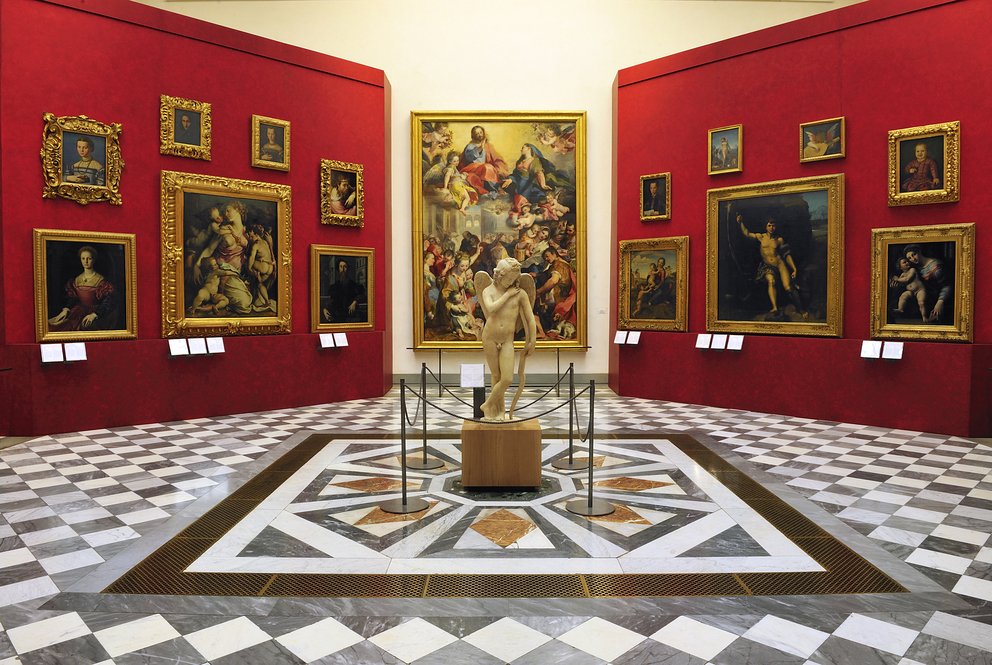 The sheer breadth of the Uffizi’s staggering Renaissance and Mannerist art collection can be daunting, let alone navigating the jockeying crowds while trying to grasp the technical, historical and political significance of the masterpiece-studded cache.

But with pre-arranged tickets, art historian docents, and respectful, informed narratives, navigating the Uffizi is a breeze. Over the course of three hours, this small-group walking tour will take a selective, exclusive sojourn back through the Florentine eras, from early examples to late masters by way of all the big names as well as some lesser known, but equally important treasures. The discourse also skips across the historic Piazza della Signoria and door-knocks the first family of the Renaissance, the Medicis. Andiamo!

Insider tip: All the information in the world won’t stop the khaki’d masses from swarming, so best steel yourself beforehand with a luscious hot choccy from artisan chocolatier of yore Rivoire, located in the piazza outside.

So much to eat, so little time! Save leg and stomach work and beeline straight to Flo’s very best…

It’s hard to make a misstep when it comes to eating Tuscan food in Tuscany, right? Wrong. All vendors were not created equal, with many wholesome local products falling by the wayside in favour of processed and imported ingredients. Sacrilege!

Enter the Italian cuisine expert-led walking tour, whisking you over the course of two-and-a-half hours by the tastebuds and depositing you at the city’s time-honoured and historic eateries, bakeries, markets and gelaterias. And, if the lure of the tastiest truffle sarnies and spicy salamis weren’t enough (unlikely), along the way, gastronomes will also learn about the city’s traditional agricultural offerings, top tables and culinary scene. Stretchy slacks on, Valentina.

Insider tip: While eating the best Flo has to offer is all well and good, why not go a step further and learn to prepare some of the heart-warming dishes yourself at glam cooking school Desinare at Riccardo Barthel? Then, post cook, sup and sip, treat yourself to a tiddly retail swish around Ricci’s vast and gorgey showroom.

Made in Florence, Oltrarno Artisans

Discover the heritage and characters of Flo’s ‘rive gauche’ Oltrarno, a historical hotbed of traditional craftspeople and wares patronised for centuries by kings and noblemen (and now you, natch).

While shopping the fabulous, traditionally-crafted goods of Florence’s atmossy time-warp nabe Oltrarno is high on many visitors’ to-do lists, a simple retail skip is unlikely to yield the first-hand understanding of these slowly dying art forms that a docent-led tour certainly will.

Beginning in landmark square Piazza Santo Spirito and snaking through the surrounding cobblestoned maze of alleyways, the three-hour stroll will grant you nigh on unfettered access to the private workshops of the area’s most revered leatherworkers, silversmiths, shoemakers, and milliners. See the artisans employing time-honoured techniques that have been passed down through generations, and learn how the manufacturing industry has evolved and impacted Flo’s social fabric.

Insider tip: When you’ve absorbed all the priceless knowledge Context has to offer, be sure to reward yourself with a well-earned glass (or two!) of wine at one of Oltrarno’s charming enotecas. We like Fuori Porta or Le Volpi e l’Uva.

Skip the all-too-common masterpiece overload and instead hone in on Renaissance IT-boy and bum sculptor extraordinaire, Michelangelo.

In a city so steeped in the fabulous Renaissance it’s easy to lose focus as you’re swept from landmark to monument all the while verging on masterpiece overload. This tour is a thankful remedy to that all-too-common Florentine phenomenon with its in-depth exploration of arguably the most enduring and impactful artist of his time, Michelangelo.

Over three and a half hours, Context’s Applied Arts specialist will lead you in a sharply focused discourse spanning Mikey’s vast and rippling body of work, from early drawings and sculptures displayed at family home turned museum Casa Buonarroti, through Bargello Museum’s staggering sculpture collection (including the Bacchus), culminating at the Galleria dell’Accademia, home to the consummate Renaissance symbol, the David.

Insider tip: You’re perfectly placed but a pixie skip from the gorgey Four Seasons hotel with its verdant Al Fresco diner and glowing Atrium bar. The importance of a post-tour review and crafty gargle cannot be overstated… so hop to it!

If ever a region called for a wine and produce tasting tour… Learn the history, nibble tasty comestibles, and get nicely tiddly all in three hours.

Insider tip: Armed with your newfound knowledge of the region’s wine history, stock up on some bottles and picnic supplies at Olio e Convivium and continue the education sprawled on Giardino Bardini’s lovely manicured tiers.