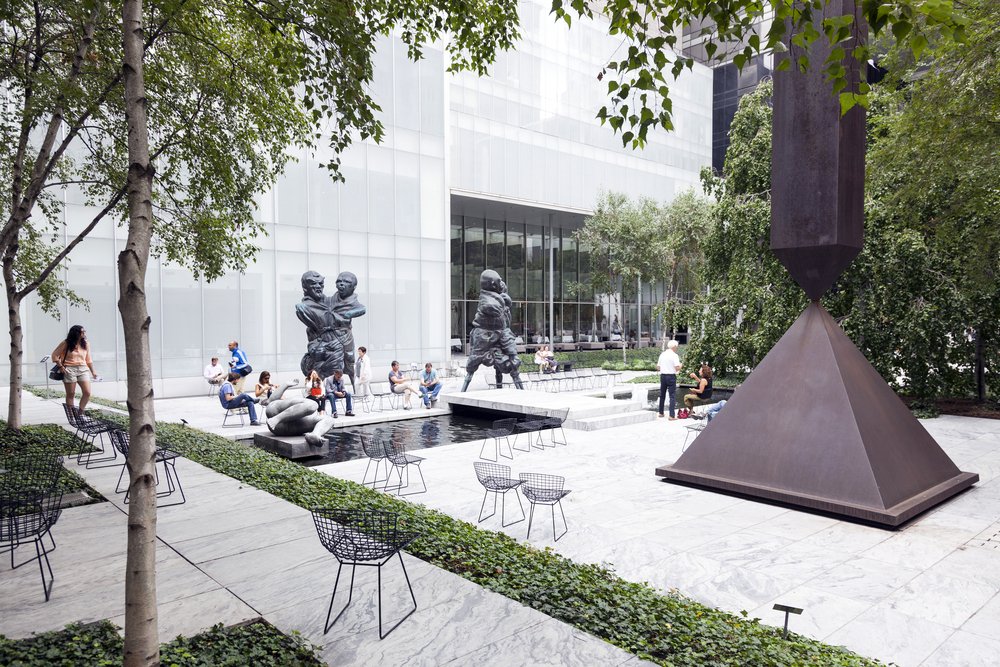 Peer into America’s first collection of mod art and emerge with knowledge as sharp as Picasso’s brushwork.

Manhattan maven MoMA is known the world over for her glorious repository and boundary-pushing narratives around contemporary art. In fact, she was the first in Gotham to open the door to European modernism, with major retrospectives of the work of famed artisans like Van Gogh. Hold on to your ears, dears…

Over the course of three hours, your art-smart docent will guide you through a maze of cherry-picked exhibits which spotlight the David and Peggy Rockefeller Building’s creme of modern oeuvres, visual media and expression.

Insider Tip: Directly across the street you’ll find the MoMA Design Store and its cache of funky design objects, jewellery, furniture and take-home trinkets; but whatever you do, don’t overlook dining with the locals at the Bar Room at the Modern.

Some of the most striking star-chitecture in the city, all seen on a guided saunter down 42nd Street.

With one of the richest scopes of design spanning various historical and cultural periods, the length of 42nd Street is studded with some of the city’s most fascinating fat-cats and majestic giants.

Beginning on the East River under Tudor City’s neo-gothic spires, the three-hour walking tour continues westward, allowing you to catch a glimpse of prime Art Deco edifices like the gleaming Chrysler building with its mid-century gargoyles, intricate hubcaps and hood ornaments, and Raymond Hood’s Rockefeller-precursor, the Daily News Building. Look familiar? You may recall Superman posing as Clark Kent inside this very building.

Hop, skip and slink into the Beaux Arts belle Grand Central Station, admiring the glittery, star-flecked “sky”of the Main Concourse and all the commuting passersby… Before strolling on down to conclude in leafy urban oasis Bryant Park.

Insider Tip: You can sit in one of the charming caffs here for alfresco sups, or high-kick it further west towards Broadway for um… duh, the Theater District.

New York gives meaning to the term ‘melting pot’ with a slew of global influences… In its cuisine.

Step aside, miss American Pie. Let Context take you by the hand (and gut) for a 2.5-hour amble through two of NY’s most exciting food neighbourhoods to explore some of the city’s most authentic eating experiences – and the immigrant communities behind them.

Little Italy: Frankly, she ain’t what she used to be… And what’s left of this little signorina can appear rather drab. Thankfully Context’s food experts have handpicked the very best pizza and pastry she still has to offer from the family-run businesses who pioneered the beloved red-sauce New York Italian. Mamma mia…

Chinatown: Manhattan’s Chinatown is but a fraction of the size of Queens’ Flushing nabe… But it’s still worth spending some time navigating this vibrant maze of fish markets and dim sum dens. Taste the best steamed dumplings, giant almond cookies and barbecued duck to be found this side of the Atlantic.

Insider tip: Merely a chopstick’s toss from Chinatown, City Hall Park is the perfect desti for a post-sup sojourn. Wonton you waiting for?

Meatpacking and the High Line: Industrial Heritage at a Crossroads

From literal meat market to a flash-trash play-dom of superb shopping, MePa is one pretty post-op neighbourhood.

It wasn’t always lush elevated parks, DVF flagships and nightclub central – MePa was once a super grunge district. This Context tour will give you a glimpse into NY’s industrial age, with stories of the rise of commerce, innovation and urban planning from the 1840s-1940s as told through brick facades, metal canopies, and Belgian block paving.

Then you’ll get up onto the High Line and check out the city’s coolest green space, converted from former elevated railroad tracks, with gorgeous views of the Hudson River and even Jersey beyond. There are a few eateries (and Terroir wine bar) dotted along the tracks, or you can DIY a picnic and bottle of Champers at Chelsea Market below and bring it up in time for sundown.

Insider Tip: That concrete edifice you spy straddling the High Line at Gansevoort St is The Standard, with happening Standard Grill for laters, or slink into the Biergarten for pretzels, ping-pong and plenty of trad German boomsadaisy!

An Insider’s Guide to Rome