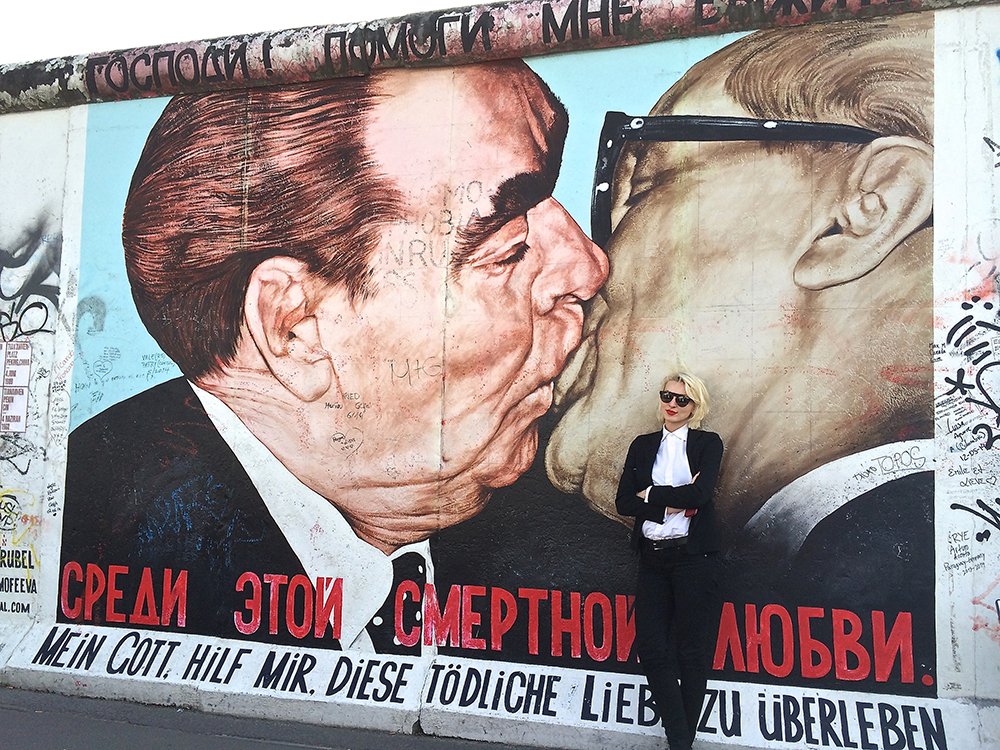 The food! The art! The naked septuagenarian swingers enjoying a Jagermeister!

You’ve landed in Berlin early in the morning, and you need to shake off the jet lag and fill yourself up on a little more than the rubbery omelette and tepid filtered sock juice that passes as airplane coffee. I like to hit the ground running and grab a pressed juice and breakfast in Mitte’s Daluma cafe on Weinsbergsweg, which is owned by a friend. They have great vegetarian food and healthy snacks. It makes me feel like I’m starting the day right before it descends into inevitable chaos and depravity by nightfall. If eating granola and eavesdropping on good looking yogis talking about their kundalini isn’t really your thing, across the road is Gorki Park, a Russian-run cafe where you can smoke without judgement while digging into authentic blinis, pierrogis and pelmenis.

Mitte is chockablock full of cafes, galleries, restaurants and shops, so it’s a great area to walk around. Check out the Judisches Madchen Schule, a former Jewish girls school, which now houses Pauly Saal (fab restaurant), Mogg & Melzer café (for your pastrami on rye cravings) and an assortment of galleries including Michael Fuchs Galerie and CWC Galerie.

Across the road from the Judisches Madchen Schule is KW Institute for Contemporary Art, a four floor multi-disciplinary art space showing emerging and established artists. On the same street is also Galerie Eigen & Art, founded by one of Berlin’s most charismatic and colourful art dealers, Gerd Harry Lybke.  One of the founders of the New Leipzig School, he helped bring to prominence artists like  Neo Rauch, Matthias Weischer, and Uwe Kowski.

Also in Mitte, and not to be missed, is CFA (Contemporary Fine Arts), one of the city’s most renowned galleries, which represents German artists like Jonathan Meese, Georg Baselitz, and Georg Herold, as well as international stars like Sarah Lucas, Peter Doig and Thomas Houseago.

For an intense art and design hit, visit the Mies van der Rohe-designed temple of modernism, the Neue Nationalegalerie, and pop in to see the exhibitions at the Gropius Bau Museum and Hamburger Banhof. There are usually great exhibitions on. Next door to Gropius Bau is a section of the wall with the Topography of Terror, for those who want to explore some of Berlin’s WW2 history, and a short walk away is Checkpoint Charlie.

Book a visit to the Boros Bunker collection, housed in an old Nazi-era concrete bunker. It’s a fabulous collection and the space itself is incredible.

And lastly, if you have time to squeeze in one more gallery, head over to Kreuzberg (which is becoming quite a hot art spot) and check out König Galerie. Located in the Brutalist St. Agnes Church, the light-filled space itself is amazing, and the young gallery also puts on a good show having featured in the past local renowned artists such as Alicja Kwade, Jorinde Voigt, and Katharine Grosse.

To stretch your legs a bit and get your head out of the white cube, take a walk alongside the remaining section of the Berlin wall at Eastside Gallery in Friedrichshain and check out all the murals on the wall. There you’ll find the iconic mural of Brezhnev and Honecker in their ‘deadly embrace’. Very Instagram worthy if you can get past the hordes of tourists now clogging the path.

The city is a feast for the eyes for architecture buffs. There’s Brutalism standing beside Deco, Bauhaus sharing a block with Modernism and Soviet architecture, and some contemporary additions from Chipperfield, Koolhaas, Libeskind and Gehry to mention just a few. Visit Daniel Libeskind’s Jewish Museum. The design and space is fantastic, and they also have a great herring salad and some cool exhibitions now and then. For lovers of Bauhaus, you’re in the right city! Don’t leave without a visit to the Bauhaus Archiv.

If it’s a sunny day head to the Tiergarten. Have a walk around the animal park, get harassed by the belligerent llama, and grab a bite to eat at the biergarten on the water, and do as the locals do and sunbathe au naturel for afreikorperkultur experience (when in Rome). On the subject of getting it all off, close by there is the Helmut Newton Museum, a must-see for fans of the Berlin-born photographer.

If there’s still time, visit the old Tempelhof Flughafen in Kreuzberg. The old airport (built by Nazi architect Albert Speer on former Knights Templar land) is now a public park for concerts, recreation, markets, and multicultural events. Depending on the time and day there are food vendors and stalls…and buff German boys jogging around the old airplane runway. Borrow a dog for an excuse to chat up. Or just ask where you can get a good gemüse kebab (Mustafa’s Gemüse Kebab on Mehringdamm Strasse, if you must know, but the queues are Soviet era and my ostalgie doesn’t run that deep).

If you’re beat and want a chill place for a relaxing drink, head to FluxBau on the river Spree. The bar, which also hosts its own radio station and assortment of DJs, has one of the most beautiful Berlin views. On your right there is the Oberbaumbrucke (bridge), which used to be the border crossing from East to West Berlin, and to your left is the Alex Fernsehturm, Berlin’s landmark TV tower. Take your camera out for an iconic Berlin photo!

In Mitte’s Tor Strasse is the Soho House, housed in a building which was once a department store, followed by the headquarters of the Reich Youth, and then the Communist Party’s Central Committee. On the ground floor there is a fabulous shop called The Store, a gallery, café, and shop rolled into one and it has a great assortment of labels like The Row, Ann Demeulemeester and J.W. Anderson.

Also on Tor Strasse is DSTM, a local indie label that designs sexy and skimpy leather and silk all-black-everything for women. From body suits, leather chokers, harnesses and knickers, this place has you (un)covered for a big night out with the leather boys. For another cult Berlin shop, head to Andreas Murkudis situated  in the former Tagesspiegel newspaper building on the gallery-lined Potsdamer Strasse. In this spacious concept shop Margiela can be found rubbing shoulders with Dries van Noten as well as the shop’s own eponymous brand, and downstairs there’s a cool homewares and design area.

For dinner head to Grill Royal on the Spree for people watching.  With lots of fashion, TV and creative types, and Russians with too much filler, it’s practically an institution. Or for a truly memorable and amazing degustation menu book Tim Raue. The food is amazing, but bookings have to be made well in advance. Dottir is a new favourite. Owned by Danish artist (and Berlin local) Olafur Eliasson’s sister, Victoria Eliasdóttir, the restaurant serves up some fantastic contemporary Nordic fare.

For an indulgent vegetarian meal, I head to Richard. They have a carnivore menu too, but the vego menu is so fantastic it would be a shame not to try it, and the restaurant decor is beautiful (more art!). Berlin’s culinary scene is finally stepping up. Thank God! There was only so much mash potato side a vegetarian could handle.

If something a little more low key is what you’re in the mood for, check out Kanaan in Prenzlauerberg. A Palestinian, an Israeli and a Syrian make hummus, not war, in this new hip establishment, and it’s billed as the best hummus in Berlin (which is quite a claim in a city that boasts hundreds of Middle Eastern eateries). The shakshouka is good enough to save you the trip to Israeli (and spare you an airport frisking), and the desserts are all home made.

For a late night drink, Berlin boasts some pretty legendary bars. You can live in the city for a year and not go to the same bar twice. Seriously. For a grungier Kreuzberg feel, recalling the area’s early punk days, head to the iconic SO36 (Berlin’s CBGB’s) for live music and a beer. They sometimes have Balkan Pogo nights. It’s awesome! If I’m feeling more grown up and can be bothered dressing up as anything other than Iggy Pop on a bender, I’ll head to Bar Tausend or Le Croco Bleu. I also love heading for a bite and drink at The Paris Bar in Charlottenburg. It’s cosy, the staff are lovely, there are always familiar faces, and every inch of wall space is full of art by notable artists, like Martin Kippenberger, who was also a regular and installed the cafe’s art collection. The staff are also wonderfully friendly and can cheer you up with creative pick up lines, and anecdotes of some of the bar’s more wild artistic clientele.

Rum Trader in Schöneberg is where I like to go for a sort-of quiet get-together with friends. It’s small and cosy and not at all sceney. There are no menus, but the waiter will mix you something special, after rejecting every single one of your suggestions on the basis that you have poor taste in booze. They take their cocktails seriously here.

After a few special drinks you won’t remember you have a flight to catch the next morning and you’ll be up for a big night, so head over to Berghain, a former power plant in Friedrichshain. This is Berlin’s techno temple where parties go on for days. The queues are notorious and the door policy brutal (there are websites dedicated to demystifying it). Don’t dress like a wanker, or a Moldovan kinder hooker, and don’t try to take selfies with the tattooed bouncer. You wont get in. This place is for hardcore dancing and music lovers. Also, ditch the yellow boots unless you’re up for a golden shower.

If you want more of a cultural experience and an adventure, and you’re not squeamish about other people’s DNA, why not try out one of Berlin’s swinger bars, like Zwanglos III in Kreuzberg? You will regret it, but being greeted by a tiny bright-orange woman resembling a Chernobyl Oompa Loompa, decked in nothing but a body fishnet and plastic shower sandals worn with Adidas socks, will certainly make you reconsider hard living, and everything you thought was bad about the ‘80s. It will also make you reconsider swinging, or sex with anyone but your partner, so this could be a great one for relationships that have lost their spark. You’re welcome.

Oh, and it goes without saying, but don’t eat the finger(ed) food.

A Guide to Beijing’s 798 Art District