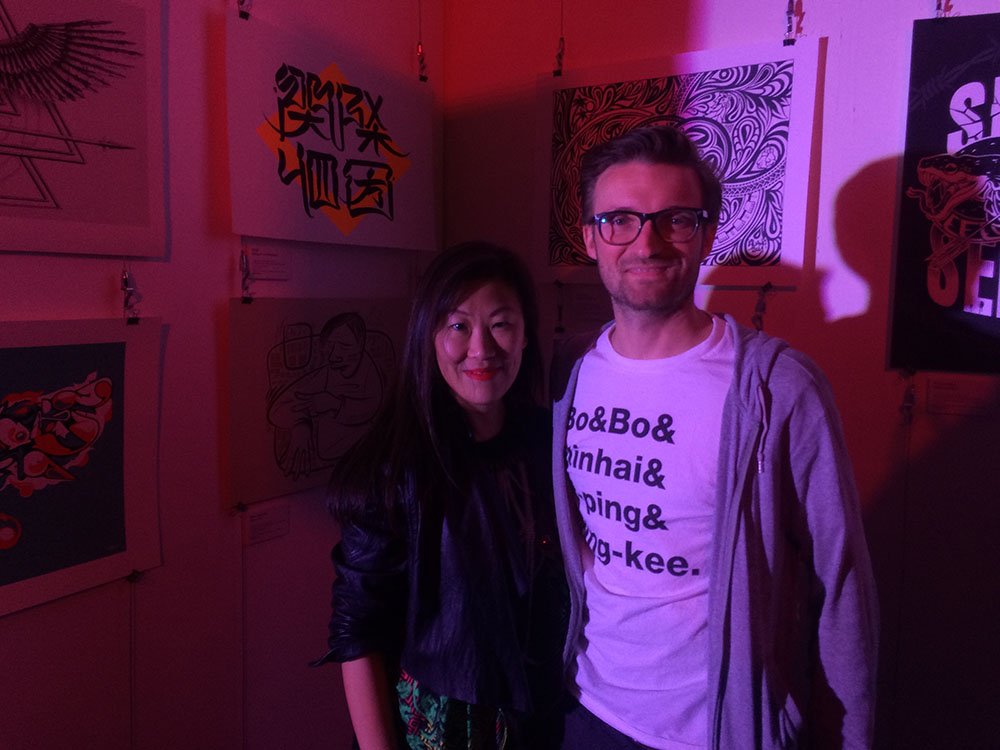 In just a few short years Hong Kong has positioned herself smack bang at the centre of the art world – chokka with modern galleries and sitting pretty at the doorstep of east and west. In the lead-up to 2016 Art Week, we sat down with a few of the city’s leading characters to find out what’s on their radar and where they unwind after all that action. Jason Dembski and Maria Wong are two of the creators of HKwalls, a weeklong local street art festival back for its third edition, this time adorning the facades of Sham Shui Po.

Tell us more about you, and the evolution of HKwalls.

I am an architect, designer and curator, Maria is an arts producer and curator, and together with our friends Stan and Jordan, we run HKwalls, an arts organization and annual street art festival in Hong Kong.

HKwalls aims to provide artists opportunities to share their work with the public, taking away the gallery and creating works of art in the street for all to enjoy. This is mainly done through our annual street art festival which takes place each March in the peak of Hong Kong art month.

The festival has evolved quite a lot; the first year was in Sheung Wan, where about 25 artists painted around 15 ground floor walls and shop gates. The second year, we expanded a bit in Shueng Wan, adding a number of larger walls including one where Wais painted the entire side of a 5-floor building. We also flew in a few artists from around Asia and Europe, added a second district and included Stanley Market.

Moving into the third year this month, we are refocusing on a single district but moving to Sham Shui Po, where we are partnering with Vans to bring HKwalls and House of Vans together to really amplify things. We’re super excited because we have some really great walls, buildings even, to paint this year, and we’re bringing in some amazing artists from around the world to paint along side those from Hong Kong and Asia.

In addition to all the murals in the House of Vans pop-up space, we will have an exhibition of prints from past and present HKwalls participating artists, as well as host a number of art related public workshops, film screenings and talks to engage the local community and schools.

I think Hong Kong’s art and creative scene in general has grown a lot in the last 5 years and I hope it continues. It’s actually one of the reasons we chose Sham Shui Po this year; there is a great community of young entrepreneurs and creatives in SSP who have opened workshops, boutiques, galleries, cafes, hostels, etc. and have come together to host events and push the scene, in my opinion adding another layer to the already rich history and culture. You can find their collective on Facebook at Sham Shui Po Tour (深水埗藝遊區).

What other events and shows are you attending this year?

This year we are taking HKwalls overseas artists around to see some of the other stuff happening… We definitely will not miss Vhils’ DEBRIS exhibition at Pier 4, as well as Art Basel and Art Central, and of course, we will all be at the HKwalls’ closing party on the 27th at the House of Vans pop-up.

And where will you go to unwind after-hours?

Fantasy dinner party – which three people would you invite and what would you serve?

Just three? Hmm… The two of us came to an agreement, sort of: John Lennon, Tina Fey and Biggie Smalls (a.k.a. Christopher Wallace, a.k.a. the Notorious B.I.G.)… Picnic by the ocean with fresh BBQ seafood and lots of beer.

The Best of Canggu, Bali

Style-Setting Sustainable Brands Around the Globe