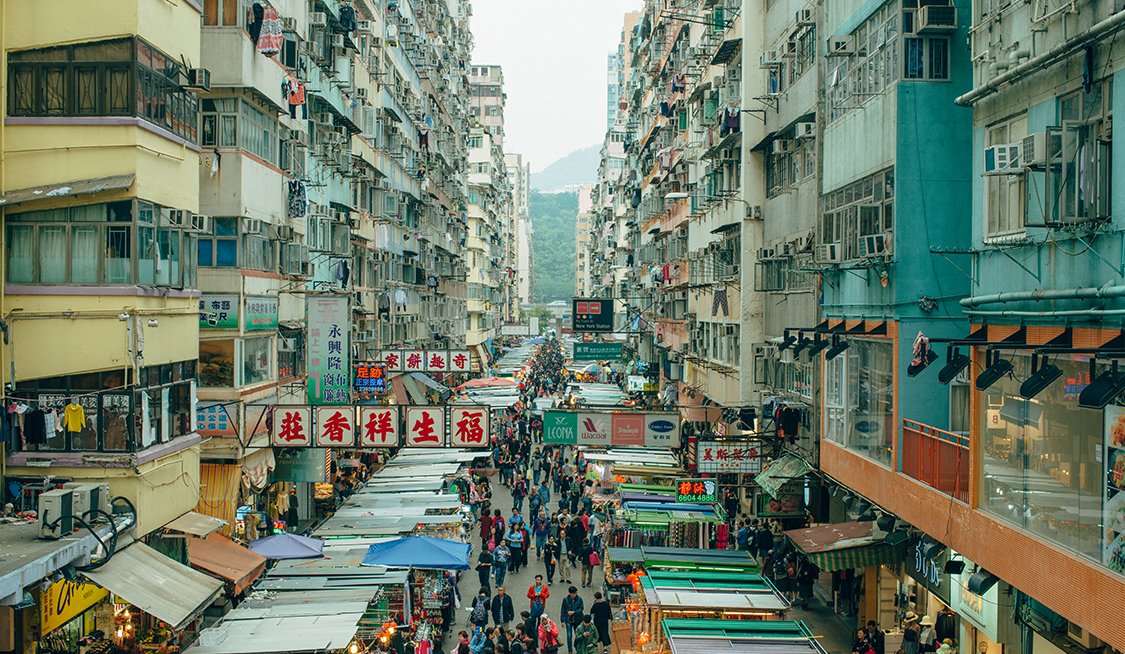 With high-end label Mables mere metres away from stalls selling all manner of kitsch and kaboodle, you can shop for high, low and everything in between. Christopher deWolf introduces the district’s markets.

It’s early in the evening and something unusual is happening on Hong Lok Street, an unassuming little lane that runs through congested Mong Kok. Lights have been strung across the lane and a crowd of people has gathered around a typical green market stall. Some are sipping fresh orange juice from the fruit stall next door; others hold cans of beer.

Inside the green stall is a collection of prints by local illustrator Little Thunder; this is the opening party for her latest exhibition. It’s not exactly what you would expect from a market stall, but Hong Kong’s street markets defy expectations. You’ll find tourist trinkets, surplus designer clothing, fresh flowers, a bewildering array of foodstuffs – and maybe even some neighbourly conversation.

The Hong Lok Street stall is Macha, a creative new venture by photographers Mandy Yeung and Bo Hui. Open only on weekends, it sells a curated selection of accessories, home products and artworks. It’s part of a new generation of market vendors that are trying to do something a little different. A brisk walk away in Yau Ma Tei, community activist Irene Hui helps run Hung Kee Good, a cheerful purple stall that stocks tote bags and other fabric products made by local seamstresses.

Right around the corner, Kai Fong Pai Dong is a community space that masquerades as a market stall. Although you can buy a variety of products — books, second-hand goods, potted plants — its real function is as a gathering place for neighbours. Every month, Kai Fong hosts film screenings, book readings, art exhibitions and other cultural events. “We want to test ideas, we want to tell stories that resonate with others, we want to tell stories for those that don’t have a voice,” say the stall’s organisers, who operate as a collective. “Diversity is the key.”

Diversity is one quality that binds together all the markets of Yau Tsim Mong. If you take the MTR to Prince Edward station and make your way south, you can pass through nearly a dozen street markets, each different from the last.

Start in the Yuen Po Street Bird Garden whose tile-roofed Chinese-style buildings opened in 1997 to house bird hawkers displaced when their former home, nicknamed Bird Street, was redeveloped. Here you can buy bird seed, grasshoppers or a new gilded cage for your pet – or you can simply admire the songbirds and parrots.

Right around the corner is the Flower Market, whose streets and alleys are packed with orchids and bougainvillea and cut roses. Flower merchants originally began plying their trade here more than a century ago, choosing this location because it was the first urban stop on the old Kowloon-Canton railway. Originally a wholesale market, it has gradually evolved into a fragrant destination for retail consumers.

You have two options to explore when you cross Prince Edward Road: Fa Yuen Street and Tung Choi Street, also known as Goldfish Street. Fa Yuen Street is beloved by local fashionistas as a treasure trove of surplus garments, while Goldfish Street gets its name from the bags of colourful sea creatures that hang from the walls of its fish supply shops, which began opening here in the 1970s

Also on Tung Choi Street are the souvenir stalls of the Ladies Market, a popular stomping ground for tourists. The outdoor markets around Canton Road between Mong Kok Road and Shan Tung Street are less frequented by visitors but even more spectacular. Spanning seven city blocks, with many diversions into adjacent alleyways, the market heaves with fresh vegetables, fruits, seafood, live chickens, medicinal roots and more.

It’s a place where you can witness how street markets bind the city together, where neighbours — known as kaifong, after the streets and lanes they share — nod hello and chat with hawkers. Whether they’re selling artworks or avocados, it’s in these markets that Hong Kong feels most alive.

That’s especially true at night. As the sun slips below the horizon, make your way to Temple Street, home to Hong Kong’s longest-running night market. Grab a stool and order some clay pot rice at one of the restaurants near Public Square Street, or feast on spicy crab at one of the restaurants around Saigon Street. Along the way, you’ll discover stalls selling every kind of knick-knack imaginable. The sound of old-school Chinese pop songs drifts out onto the street from one of the many time-warp karaoke bars.

Temple Street wraps up around midnight, but not far away, the Gwo Laan wholesale market in Yau Ma Tei is just getting started. In recent years, more and more retail shops have opened in this century-old fruit market, offering succulent seasonal produce from around the world. It truly comes to life in the wee hours of the morning, when the wholesale vendors kick into gear. Stand back and marvel: it’s the beating heart of Hong Kong’s market life.

Originally produced by LUXE for DiscoverHK.

An Insider’s Guide to Tokyo

How To… Korean Sauna