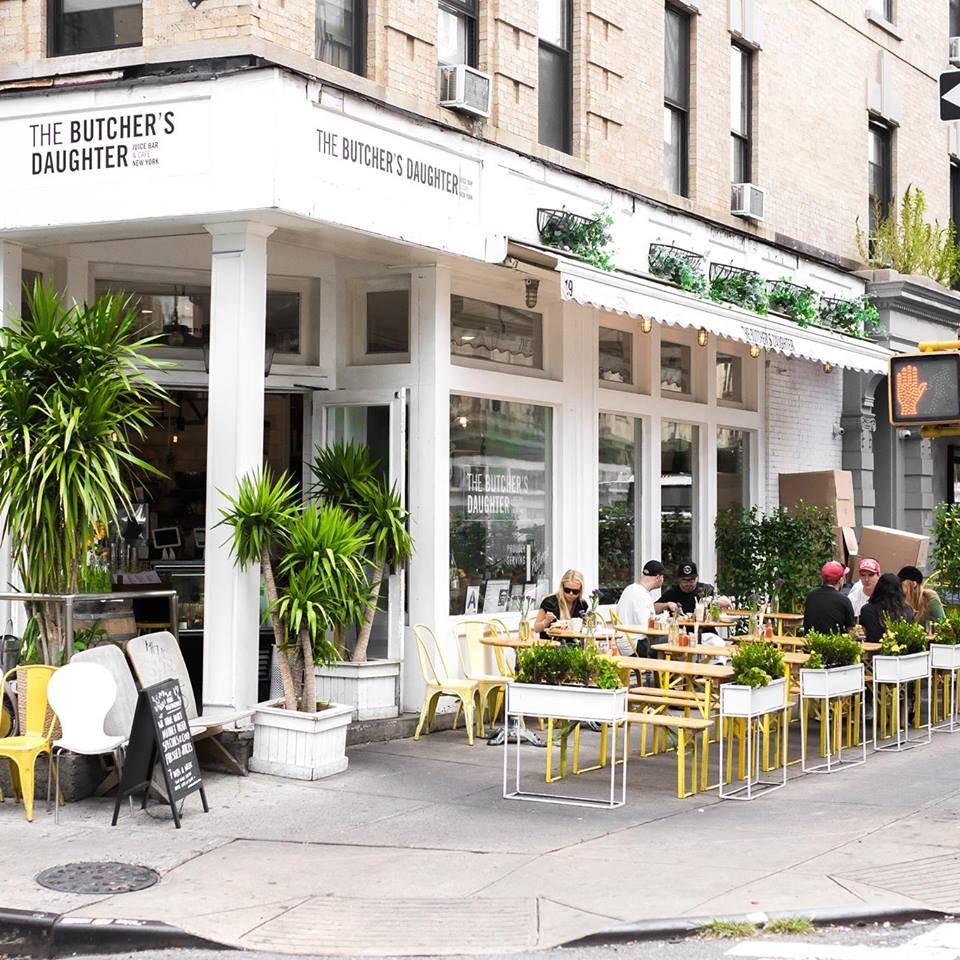 With A-listers like Queen Bey and Hemsworth junior touting their vegan credentials and even the most ardent carnivore reducing their meat consumption, 2018 is the year the vegan trend hit hard.

Whether you’re a committed carrot-cruncher or carni-craving bloodhound, you’ll find veggie-veering restaurants listed in the New York, London and Tokyo guides. Here are a few of the game changers: green truly is the new black, baby…

The health-conscious Gothamite go-to, this relaxed rustic-chic LA-import is known for its health-boosting elixir shots and avo toast, but it’s a great veggie all-rounder. Alongside a long list of cold-pressed juices and power smoothies is an extensive brek-brunch-lunch-dinner menu, featuring updates on the classics with gluten- and carb-free options aplenty. Cauliflower pizza, perhaps?

Eating your greens has never been so fashionable and this much-lauded Lower East Side counter is the frontrunner of the meat-free trend in NYC. Now in its second locale, Dirt Candy continues to chart an original course with its forward-leaning set menus (choose from 5 or 9-10 courses) and no-tip and profit share policies. The first ever vegetarian panhandler to appear on Iron Chef, Canadian owner Amanda Cohen has earned her stripes with original dishes such as brussels sprouts tacos and portobello mushroom mousse with sauteed Asian pears. Be sure to save room for one of the heavenly desserts.

Dan Kluger of ABC Kitchen and ABC Cocina fame is the talent behind this understated dining room, housed in a C.19th Greenwich Village townhouse. While not strictly vegetarian, legumes are standouts of an inspiring menu, which spotlights the regional farmers and producers Kluger has befriended during 20 years of frequenting Union Square Greenmarket. Produce-driven small plates include roast beets with ginger, orange, cashews and sunchokes, while heartier dishes span veggie burger and chilli-spiced whole wheat spaghetti to a simple poached egg salad, all designed to share. Expect exemplary pastas, pizzas, desserts and drinks, too.

Repping four branches around London, bright, friendly Mildreds is verging on claiming chain status. But Pret this is not, as each restaurant has individual style and character, from Soho’s elegant C.18th townhouse to the modern, colour-pop canteen at King’s Cross. Food cites Asian and Middle Eastern influence, think: gyoza dumplings, Sri Lankan curry and spiced chickpeas with Persian limes and harissa, with meals available to take away too. There’s a handy list of allergens and divine vegan-friendly puds while the list of craft ‘tails and organic pours keeps it lively. Mildreds Soho is the go-to to spy Voguistas actually eating; head to Dalston for more edge.

Eating clean might have lost its cachet, but this light, flora-festooned restaurant in Westbourne Grove is a perennial favourite with lithe-limbed It-gals. Eschewing meat, gluten, refined sugar and all manner of chemicals, the range of global-riffing plant-based dishes includes zesty Mexican bowls, spelt-mushroom pastas and heartier Ayurvedic curries. Should your neighbour’s obsessive snapping for her Insta feed drive you to the nearest Shake Shack, find solace instead in the decent range of organic beers, wines and house-made cocktails. Stella McCartney and Liv Tyler are known to be fans, will you be too?

Young Turk James Lowe’s no-choice menu might well be as uncompromising as the all-white Scandi-esque design at this Michelin-starred paean to British heritage cuisine but vegetarians, vegans and pescatarians are also admirably catered for.  Inventive, daily changing menus, beautiful presentation and elegant atmos with no harried turning of tables, what’s not to like? Book!

Read More: New York: The World on a Plate

Sitting under Tokyo Tower, this former sake brewery turned temple of tofu is one of the most serene restaurants to be found in the city.  Lacquered pillars, tatami floors and a pic-perfect rock garden backdrop refined seasonal kaiseki-style menus which star the humble soybean in meals made with spring water, seasonal vegetables and flip-fresh fish. Go at dusk to soak up the sunset and quintessential Japanese ambiance; take drinks in the romantic art nouveau-style lounge afterwards.

Specialising in shojin ryori, the traditional vegetarian fare served at Buddhist temples, this chic Roppongi counter is helmed by Daisuke Nomura whose family has a long connection to the eight-century strong culinary tradition. Wholesome and tasty, his seasonal, veg-centric menus reflect the time-honoured cuisine, while catering for a modern, cosmopolitan palate with cutting-edge techniques and unconventional ingredients. Vegans be warned, the stock is made with katsuobushi (bonito flakes), though Nomura will ensure your meal is 100% flesh-free with advance notice.

Gluten-free Ginny’s rejoice! This slick, casual diner has your digestive needs catered for with its gluten and meat-free set menus. A fave among the Aoyama style set, food is seasonal, super-fresh and light with dishes spanning salads and pastas to pancakes and baked goodies. Servings are on the small side, so order extra if you’re hungry.

Produced in partnership with John Masters Organics, a premium organic beauty brand founded in 1991 by pioneering hair stylist John Masters in New York and now available around the globe.

Shop the collection at johnmasters.com.hk

Nopa, Istanbul: Dining Under The Stars