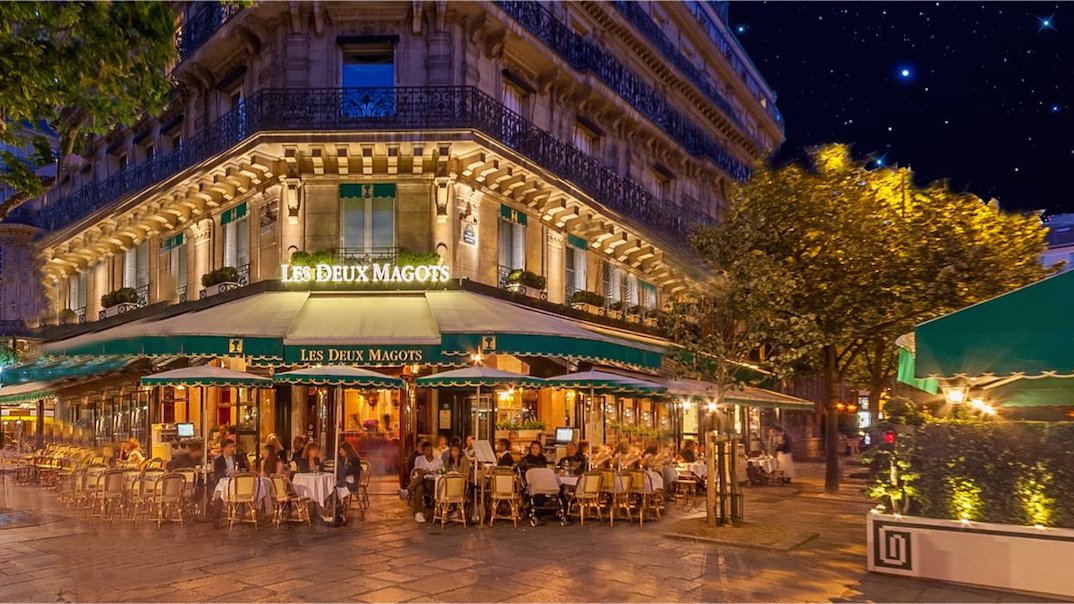 One of the C.20th’s greatest artists might hail from Malaga, but Paris is where Pablo Picasso spent most of his life. In celebration of Musée d’Orsay’s blockbuster autumn exhibition, Picasso. Blue and Rose, we take a tipsy tour around some of the infamous bon-viveur’s favourite haunts.

Poised opposite one another, on the Left Bank’s boulevard Saint-Germain, are rival cafes Les Deux Magots and Café de Flore, both of which were frequented by Picasso, the existentialists and Lost Generation in the 20s and 30s. With each still retaining their glorious Art Deco interiors, it’s a tough choice: ‘Magots’ is prized for its people-watching terrace and sinfully thick hot chocolate, while ‘Flore’ delivers style in spades with mini Viennoiseries at breakfast and lunch plates like duck breast and green bean salad.

A paint flick from the Jardin du Luxembourg – in the once laughably cheap Montparnasse – is quintessential brasserie and topiary-lined patio, La Closerie des Lilas, which has been pouring aperitifs for the boho set since 1847. Book for a light dinner at the bar for maximum scene, but starstruck Susies be warned: A-listers hiding in leafy nooks may cause whiplash. Or, skip down the boulevard to rouge-hued La Rotonde, another bistro beloved by Erik Satie, Man Ray, and F. Scott Fitzgerald.

Read More:  Paris by the Experts

Aside from the now tourist-swamped Moulin Rouge, another Montmartre cabaret ‘club’ patronised by saucy Pablo was Au Lapin Agile. It was here he met and fell in lust with Fernande Olivier, who features in his celebrated Les Demoiselles d’Avignon. Res ahead for your own glimpse of ‘Songs, Music, Poetry’ in this cramped character-packed boîte – and peepers peeled for the Picassos and Toulouse-Lautrecs lining the walls.

You’ve wined and dined your way across town, now for a spot of culture. Picasso famously spent many an hour pouring over the ancient and European masterpieces at the Louvre, proof of which can be found in works such as Guernica. To avoid today’s wretched queues and simmering tempers, buy the great value museum pass and book lunch at the chic Café Marly. Next stop: Cathédrale Saint-Alexandre-Nevsky (12 rue Daru, 8th). Picasso married Olga Khokhlova in this spectacular neo-Byzantine church, with Jean Cocteau, Max Jacob, and Guillaume Apollinaire as his groomsmen. Sm-art!

Opening its doors on 18th September at Musée d’Orsay (in collaboration with Musée Picasso), the showstopper exhibition Picasso. Blue and Rose, showcases some of the maestro’s most critical early works (1901-1906). Runs until 19 Jan 2019. musee-orsay.fr

5 Of The Most Romantic Spa Resorts In The World

The LUXE Lowdown on Travelling with Kids